Aphrodite and Ixchel: A tale of two goddesses

You don't run across many islands with a hometown goddess. Cyprus is one, thanks to the legendary birth of the Greek love goddess Aphrodite there.

So is a tiny speck off the shores of eastern Mexico called Isla Mujeres, where Mayan women once worshipped at a shrine of their goddess of love, fertility and the moon.

Spanish explorers from Cuba stumbled on the island in 1517 while they were sailing around the Caribbean looking for slaves to work their sugar plantations. The foreigners inked it on their maps as Isla de las Mujeres (Island of the Women) after the female figurines they found scattered around the skinny, four-mile-long island. 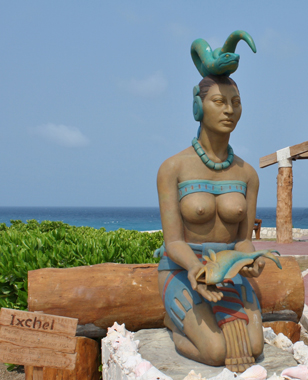 They didn't find many good slaves among the handful of Mayan fishermen living there. So after planting a huge cross on the beach and reading “El Requerimiento” – a  proclamation (in Spanish) telling the uncomprehending villagers they'd become subjects of the Spanish king – the invaders sailed on to what they hoped would be richer shores.

The foreigners didn't know it, but their latest conquest was one of the sacred islands of Ixchel (eee-shel), a super-deity in the Mayan pantheon. The little statues were of the love goddess and her three daughters

Fast-forward to today, and – after centuries of mainly being home to a few fishing families and occasional pirates – Isla Mujeres now hosts divers, whale-shark watchers, off-the-beaten-track vacationers, campers, locally stationed sailors and a fast-growing expatratriate art colony. Also seen darting around in rented golf carts are hordes of day-visitors from the nearby mega-resort at Cancun on the Yucatan mainland. 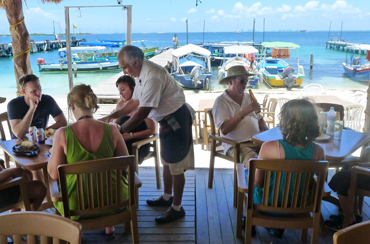 The island's powdery, white-sand beaches are dotted by 70 hotels and inns with a total of 1,400 rooms. Sometimes it's hard to find an empty room, but more often than not there are plenty of vacancies. But that may change soon.

Local officials plan to cash in on Ixchel's presence on Isla Mujeres by branding the island as a wonderful spot to get married, enjoy a honeymoon, celebrate anniversaries and otherwise bask in the romantic aura of their hometown goddess – much like Aphrodite is used to bring such business to Cyprus.

Isla Mujeres Tourism Director Eyder Jahil Hoth said Ixchel's temples and statues are “natural attractions” for visiting couples. A particularly popular place for weddings, he noted, is on a clifftop overlooking the ocean near the ruins of Templo Ixchel, believed to have been the goddess' main shrine on the island.

(Cyprus' most popular spot to tie the knot is on a clifftop overlooking the place where stories say Aphrodite came to life by popping up out of the ocean, fully grown.) 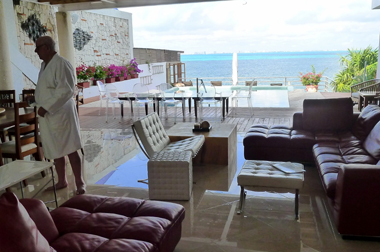 For the record: According to Isla Mujeres cronista (historian) Fidel Villanueva, the local shrine of Ixchel is one of 32 such shrines on islands off the coast of the Yucatan Peninsula and also on the mainland. The goddess' principal shrine is on the island of Cozumel.

Getting there: Most visitors get to Isla Mujeres on water ferries from several mainland terminals in the Cancun area. It's about a 20-minute ride each way.

Staying there: A dozen or so of Isla Mujeres' 70 hotels and inns are rated four or five stars. Among popular upper-end properties is the four-suite Dream Luxury Villa (www.dreamluxuryvilla.com).