Through the Eyes of the Soul, Day of the Dead in Mexico – Yucatan 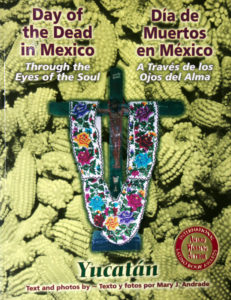 Day of the Dead in Yucatan is known as Hanal Pixan, which signifies the soul’s path through the essence of food.

Mary visited the capital and several towns in 2001. Through more than a hundred photographs, the author presents the Day of the Dead celebration specific to Yucatan. For example, at homes, family members wait for the souls next to altars, where they place offerings of unique dishes like mucbil chicken, which is “cooked in the womb of Mother Earth.” That is, this special dish is cooked in a pit underground. 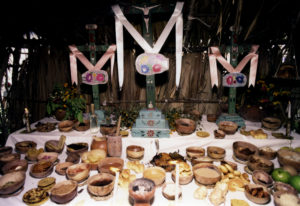 Anthropologist, Miguel Angel Vergara, sees the wonderful symbolism of this regional dish and considers it a centerpiece of veneration and conviviality. He says, “The substance, baked by Mother Earth, is that essence of humanity transformed into food. For that reason, mucbil chicken, also known as pib or tamal, is transformed into food for the soul and gives people the opportunity to nourish their bodies and souls.”

“The Force of the Hanal Pixan Celebration 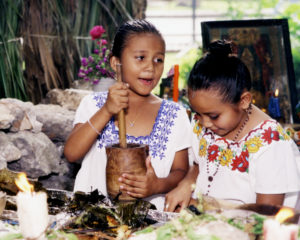 The priest, Camargo Sosa, reports that the Hanal Pixán celebration in all its manifestations, is more visible in rural areas than urban ones.  It is emphasized more in lower and upper, rather than in middle socio-economic classes.  He considers it is being lost in the middle class.  One reason he cites is that those from the property owning upper classes had their children cared for by Mayan care givers, and hence were raised in close contact with the rites, learning the language and customs.

Regarding the need to pray, he comments, “when the altars are prepared and no prayer is made, the offering turns into a mere object of decoration. I don’t accept this. It does not help maintain the tradition with which we enrich humanity and identify. Especially now, with the satellites and global information systems that have made a village of our world and created a place for customs to be known despite physical distance.  If the dead are honored, the towns are alive.  If they cook, decorate and pray for the dead, its because they have that conviction.  In the small towns, the tradition is more unadulterated.  In the large cities, the majority of the population follows what is established, but it has already been mixed with Western elements.  We will continue the Day of the Dead celebration, still palpable in much of our inhabitants, as a vital part of the soul of our towns; that cross-breed Yucatecan soul which is a union of those two great cultures, the Mayan and the Spanish. The Mayan remains present in its descendants, just as in its beliefs and traditions.”

Through the Eyes of the Soul, Day of the Dead in Mexico – Yucatan